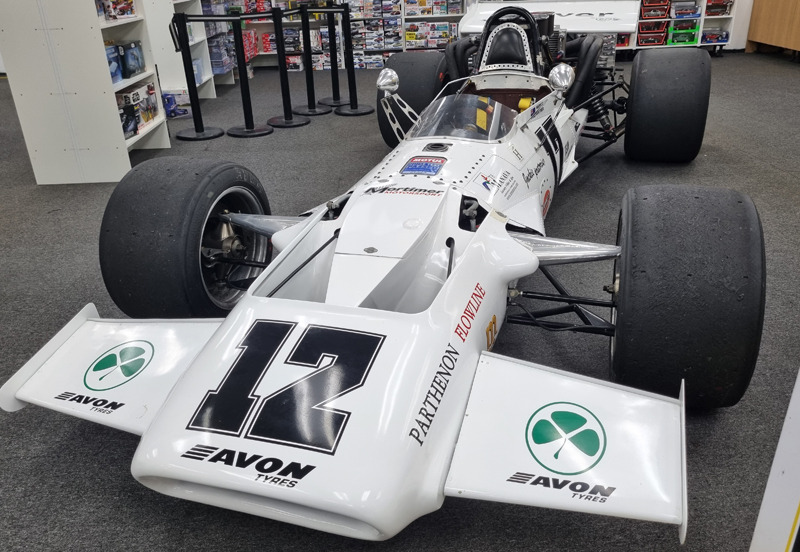 Motorsport enthusiasts should be wheeling their way to Coast where a race-winning Formula 5000 car once owned by US actor James Garner is on display.

The Surtees TS5 (Chassis Number 002, Chev 302 5000cc engine), currently housed inside Scale Hobbies’ new store, was manufactured in the United Kingdom in 1969 by John Surtees, a former Formula One World Champion and four-time 500 cc motorcycle World Champion, the only person to win world championships on both two and four wheels.

It was originally designed to be a F1 car, but this model was never used in that series, so it was sold the American International Racers (AIR) team to be raced on the other side of the Atlantic in the F5000 series. Award-winning actor and race-car driver James Garner was one of the team’s owners.

The Surtees TS5’s next owner was South African Ford dealer Doug Serrurier and the car was raced successfully in the South African championship by former Formula One driver Jackie Pretorius in 1970. It was also driven by Willie Ferguson and Spenser Schultz in 1971 and Pretorius again in 1972 before being sold to Nolly Limberis for 1973 and 1974.

It then had a brief unsuccessful stint in drag racing, crashing on its first outing, damaging the rear suspension and was stored unrepaired for many years.

The car began a new life in New Zealand when it was bought and restored by Warwick Mortimer from Matakana in 2009. Mortimer raced it at Pukekohe, Hampton Downs and Ruapuna over the next four years, as well as in Australia for the 2011 Australian Grand Prix F5000 support race and in the UK at Oulton Park and Brands Hatch in 2011. It was also the A class winner in the 2012/13 season of the New Zealand F5000 series.

The car will be on display at Scale Hobbies until mid-July.